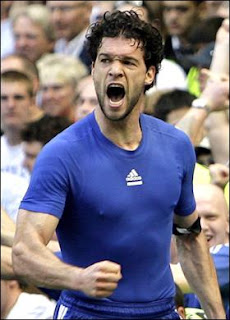 Ballack was at his terrific best against united

Oh God, what a superb game of football, at the end of which we thoroughly deserved to come out victorious. Manchester United were awful and hopeless in the first half. We totally dominated them from start to finish in the first period. We should have scored early on in the game itself when Joe Cole hit the post. We continued to press forward with the like of defensive minded Mikel spending most of the time near united’s penalty box. Cech was sleeping on a cot at the other end because there was pretty much nothing to do for him. United were holding on only just.

And finally the pressure paid off right at the end of injury time in the first half. Drogba shook of four defenders and then put a beautiful cross for Ballack to head home. Ballack must deserve as much credit as the cross, such was his wonderful timed run.

I thought that second half united will improve. And they did only because we sat back. The game was then comfortable for us until a dreadful error from the ever reliable Carvalho. He gave the ball straight to Rooney who then finished. The title dreams were in shatters. Grant then brought on Anelka, Shevchenko. At the 83rd minute a miracle happened. United who had not conceded a penalty all through the season in the league conceded one after Carrick’s handball. Ballack stepped up and sent it home. What a victory, what a match.

Now we are level on points with united leading only be goal difference. Lets hope that united drop points in the remaining 2 games.