in Match Preview April 25, 2008 Comments Off on Chelsea vs Manchester United Preview 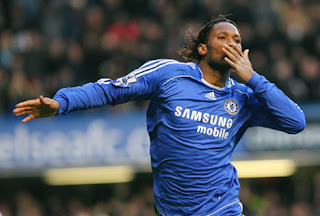 Drogba should be firing on all cylinders.

Today we face Manchester United in what could be a win or lose for the title. If we manage to get all three points then we are giving ourselves a massive chance hoping that Manchester United draw or lose any of their remaining two games. If three points are essential then we must attack right from the start. We must get in their faces, show lots of aggression, rattle them in the opening 15 minutes or so. Having said that its also important that we don’t concede in the opening 20 minutes. We don’t want to be chasing for the rest of the game. Its very much important that we get the first goal.

Frank Lampard is set to miss the clash but in Essien we have a player of the same quality to replace him.Drogba is expected to start along with J.Cole and Kalou. Essien, Ballack, Makelele are expected to run in the midfield. If Manchester United also go with the 3 in midfield then it should be very tough to break them down. Hargreaves, Carrick, Scholes should start in midfield.

Lets hope that we get the 3 points today and get a win against Liverpool in the Champions League on Wednesday in what could be season defining week for us.