Drogba fires us into the Final 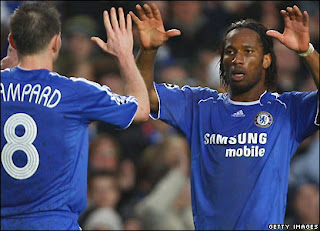 Drogba and Lampard were at their scintillating best

Rafa Benitez must be wondering why he opened his mouth to speak against Didier Drogba just before the match. Rafa benitez said that Drogba was a diver and a cheat. Well on Wednesday Drogba showed that he is not a diver but a world class striker by scoring two brilliant goals. And there was Frank Lampard too, best as ever.

We were splendid in the first half. We had a total of nine shots on target which may tell you the level of dominance. Liverpool were enjoying better possession of the ball, having 60% possession in match. But creating chances and taking them matters more and we did just that. Lampard was simply brilliant and his England colleague Gerrard could only watch and dream about it. He played some 5 brilliant balls which were capable of destroying and defense. Such was a pass that led to the opener. Kalou got hold of the ball and shot, Reina could only parry it to his right. Drogba coming in scored from that difficult angle without taking a touch. He then went over to celebrate before the Liverpool dugout.

I expected Chelsea to come out all guns blazing in the second half and kill the game off. But it was exactly the opposite of it. It was like the Manchester United match where we sat back and allowed them to attack us. Then the pressure eventually paid off when Torres scored from a Benayoun pass. Carvalho and Terry were superb at the back even though both were at fault for the Torres goal. It then took us to nearly 80 minutes to find out feet again. But it was not enough as the tie went in to extra time as last year.

But we started brightly in the extra time even though there were some tired legs out there. Essien who was fantastic all through the night scored a beautiful goal after his shot evaded all the players in the box. But it was called offside when it seemed it was a very very good and proper goal. It only happens to us. But then immediately Ballack was fouled by Hyypia and a penalty was given. Up stepped Lampard and scored a unstoppable one. He broke into tears after dedicating it to his mother who passed away recently. Drogba soon added a third from a good low ball from Anelka who came on for Joe Cole and we were on our way to our first European Cup Final even though Babel scored with minutes remaining to give us a scare, but it was not enough. We were in the Final. The players smiles told it all.