in Squad Updates April 14, 2008 Comments Off on Petr cech close to return 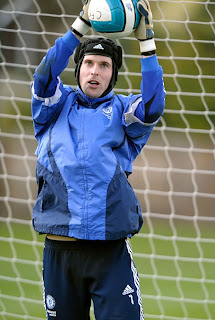 Petr Cech who has had a horrific injury after clashing with defender Tal ben haim is close to returning according to manager Avram grant.This is what Avram had to say about Petr cech’s injury.

‘I don’t know, I said he is improving, we have tested a mask for him, We need to go again with him, and in a way he is training. In one training he wore a mask, one he was without. We are checking all the possibilities with him.

I cannot tell you now but we need to speak with the medical department and see how he is feeling, the chances are not so good. I think for the moment it is a risk, but I am not a doctor.’

Cech looks like he will be starting against wigan.Even though it might be early for him we need him to be playing in all the matches starting from now as we are in a crucial part of the season.