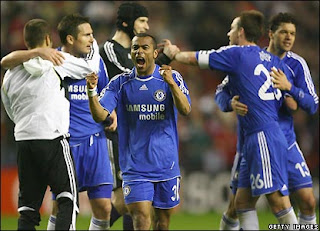 The score line doesn’t tell the whole story.We got battered out there in Anfield but we are coming back with an away goal.We were totally rubbish and were outplayed throughout the match except the last ten minutes or so. Most of it is down to Joe Cole i believe because he is the only creative player in our team who can open up a game when things are not going well. But yesterday i think it must have been one of his worst performances in a chelsea shirt. He was invisible throughout the match and then missed a glorious opportunity to take the lead from a Lampard pass. 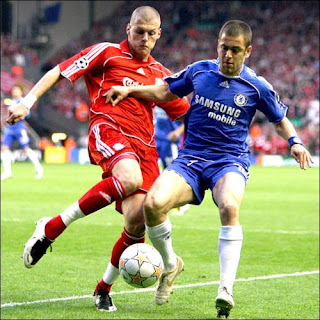 Joe Cole not having his best of days.

Due to this all we did last night was pump the ball up to Drogba who was out on his own to make something out of it. To be fair you can’t ask much more from him because he terrorised Carragher and Skrtel on his own. The thing that was missing was the support from midfield in the mode of Lampard and Ballack as they both sat deep. As a result we had only 3 shots on target the whole match

But hey this is the champions league and those with luck go on to win the cup as proved back in 2005 when Liverpool went through to the final without even scoring a goal against us (Luis Garcia’s Ghost goal as its famously called). And we got the luck through John Arne Riise. He headed the ball into his own net in the last seconds of injury time to give us a precious away goal. For Liverpool it was Dirk Kuyt who scored just minutes before half time. 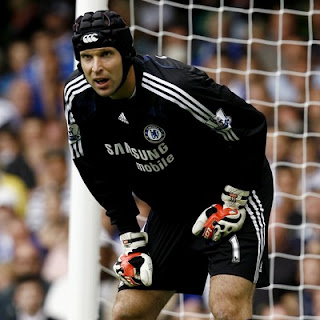 Petr Cech was at his usual best.

And i forgot to mention the best player on the pitch for us, Petr Cech. After so many horrific injuries he has once again proved that he is simply the best in the world. If it was not for him we could have easily let in three or four.

The second leg is on 30th April, Wednesday. A little fact. Liverpool have not scored for the past eight games at the bridge.