Latest News
Home / Transfer News / Ballack back to his best..?

Ballack back to his best..? 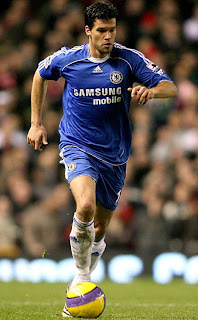 Signed on a free transfer two years ago from Bayern Munich with a huge reputation as one of the games greatest names, on a huge wage packet of £130,000 a week, Micheal Ballack has so far found life at the bridge hard along with Andrei Shevchenko. Last year was a season to forget for him. Branded by Jose Mourinho as one of his ‘Untouchables’ he went on to be unnamed from the squad of 25 for the Champions League. Last years season ended with a miserable ankle injury at Newcastle when Titus Bramble tackled him. He immediately left to Germany to have a surgery, but everybody thought that he has faked a injury and was no longer interested in playing for Chelsea FC. He had to prove his injury by actually provide the Chelsea physicians with a piece of the broken bone from his ankle. Then went nearly eight months on the sidelines. Jose Mourinho then departed from Chelsea and from then on there has been no turning back for him.

One of Ballack’s most prized assets is that he is a very good header of the ball, using his huge physical presence to score nearly 50% of his goals through headers. And being a German, he can take penalties too with unmatched accuracy. Since coming back from injury he has been one of our consistent players. His goals recently against Manchester United and Newcastle has put us back in the title race. Recently it has been said that he is going to be given a new contract for his performances this season.

Life has certainly turned the corner for Ballack.