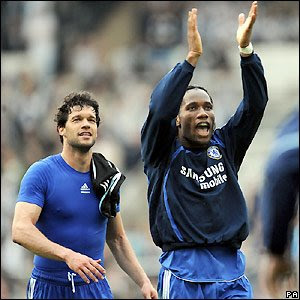 Ballack continued his good form up at Newcastle

I think that the Petr Cech correctly said that this Chelsea team is stronger than the one which won the league two years back. He looks to be correct, as i have never seen a side with such great spirit and desire to win. Considering all the problems we had this season from the huge number of injuries, departure of Jose Mourinho, the African Cup of nations and a host of others, to be competing for the double at this stage is a fantastic achievement. All this good work would have been spoiled if we had not got the right result at Newcastle.

And the players did not disappoint. Newcastle parked the bus in front of the goal and let us enjoy the possession. They were in fact not having a striker out there as even Viduka was back defending. We took nearly 20 minutes to get going within which we received our first scare of the match when Cech produced an excellent save and then John Terry cleared off the line. The first half was pretty forgetful.

Second half Avram Grant made changes to the formation to 4-4-2 from 4-3-3 with Anelka and Drogba upfront and it was paying dividends, as we continued to press forward. Malouda won a free kick in a dangerous position which Drogba took and his cross was duly converted by Micheal Ballack, his 3rd goal in last two league matches. Lampard who came on for Anelka played a wonderful ball to Malouda who scored his first goal in months to settle any nerves among the Chelsea fans. Overall good performance and important three points.

Man of the Match: Micheal Ballack