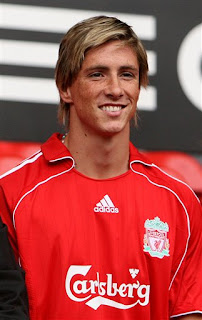 1.) Liverpool striker Fernando Torres, has now emerged as one of the transfer targets for Chelsea FC. Avram Grant was thinking of bringing him to Stamford Bridge before he was sacked. But it is rumored that Roman Abramovich is prepared to pay £50m for his services. The main factor which can pave way for his arrival to Chelsea can be that Liverpool have been struggling to repay the loan of £25m they acquired for the purchase of Torres from Athletico Madrid last summer. As a result of which, they maybe forced to sell him in order to repay the loan.

Torres is a fantastic striker, blessed with pace and strength. He is good in the air and has scored a record 33 goals in his first season in the premiership. Whether Tom Hicks, the Liverpool co-owner be willing to sell given the £25m profit on him in just a year remains to be seen. Still £50m is an absurd amount for him given the fact that he has scored more than 90% of his goals at home.

2.) Mark Hughes has emerged as one of the favourites to replace the vacant Chelsea manager’s post. He is a former Chelsea player, who has proved that he has the credentials to work at a top club after doing a sterling job at Blackburn Rovers. He commands respect, does very good business in the transfer market, is tactically astute. But whether he can handle the big pressure that comes with when managing Chelsea and maintain a good relationship with the owner remains to be seen.

3.) Frank Rijkaard, who is without a job has been contacted by Frank Arnesen, the sporting director and also his friend about taking over the vacant managerial role. He is expected to be interviewed as early as next week.