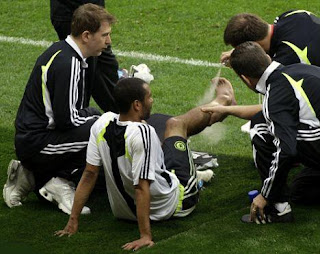 1.) Defender Ashley Cole badly injured his ankle during training when Claude Makelele jumped into him in a two footed tackle. Makelele is 35 years old and is one of the experienced member of the squad. Now why is there a need to tackle such a important person in such a manner ahead of the biggest game of the season. He must have truly lost his mind.

Even though Wayne Bridge is on stand by, Cole is a defender, even though not in his best form, can stop Christiano Ronaldo. He has done it time and time again in the past and is certainly one member of the squad you can’t afford to lose.

Cech
Essien Carvalho Terry Cole
Makelele
Ballack Lampard
J.Cole Drogba Malouda
3.) If we win the Champions League today then we will be the first club from London to do so.

4.) Chelsea are reportedly interested in Real Madrid star Robinho and are willing to offer £27.9m for his services, with Manchester United and Arsenal also keeping close eye on him. However Real Madrid president, Ramon Calderon, has said that he is not transferable.