in Transfer News May 19, 2008 Comments Off on Chelsea FC: Today’s Top Stories 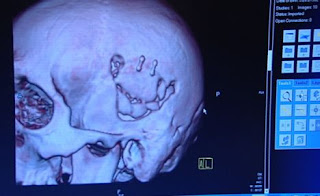 1.) Inter Milan are reported to have agreed a four year deal with Frank Lampard, whose contract runs out in a year. These reports have been claimed rubbish by Lampard’s agent. Reports about Lampard switching clubs now will most probably not be true because it is widely believed that Lampard will go to a club where former manager Jose Mourinho takes up his job.

2.) Petr Cech suffered a severe skull fracture last season. Dailymail has revealed the pictures of the MRI scan for the first time. The picture shows the extent of his injury. Image Courtesy: Dailymail

3.) Ahead of the Champions league final it is revealed that the pitch will not be good as there has been trouble in maintaining the pitch at top condition due to Russia’s climate. So a free flowing football match is unlikely to be seen. One can expect a game more like last years FA Cup Final.

4.) John Terry, Ricardo Carvalho, Didier Drogba have all recovered from their injuries and are expected to start.

5.) The Referee for the Champions League final has been announced as Slovakian Lubos Michel. He is famous for awarding the ‘Ghost Goal’ for Liverpool against us in the semifinals in 2005. Chelsea have lost both the games he has officiated, both by the same margin of a single goal. The defeats were against Liverpool and Werder Bremen.