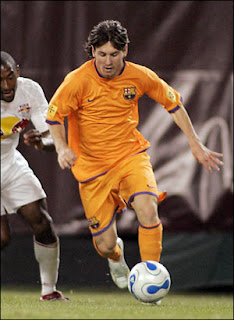 ‘News of the world’ reports that Chelsea are set to make a audacious $160m bid for Barcelona star Lionel Messi. Barcelona are in a state of confusion whether to sell the player or not. It’s no big secret that Chelsea owner Abramovich is a big fan of Messi and he can certainly provide attractive football as craved by the owner. Abramovich is determined to pay what it takes to bring Messi to Chelsea FC. Wages certainly won’t be a problem and status too, as we are in a Champions League final for our first time and surely capable of winning it. He should fit comfortably in the 4-3-3 formation that we play. Should the rumour be true and the transfer goes through then it will break the world record fee of $93m paid by Real Madrid CF to Juventus FC for Zinedine Zidane in 2001.

Early in August Abramovich met Ronaldinho’s agent and his brother to discuss a possible move to Stamford Bridge but the transfer fell through due to the player’s poor form and also due to the new policy that Chelsea won’t be buying players above 28 years of age. But Messi is only 20 years of age and would be a instant fans favourite should he come here.