Deschamps claims to on the Short-list

in Manager News May 27, 2008 Comments Off on Deschamps claims to on the Short-list 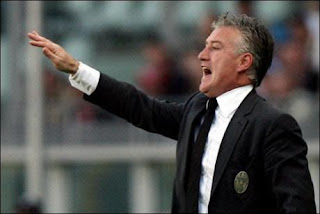 Didier Deschamps, former Monaco and Juventus manager has claimed that he is on the shortlist of four managers to replace Avram Grant as the manager of Chelsea FC. The former French international who won both the 98′ World Cup and Euro 2000 is currently out of work after leaving Juventus. A former Chelsea player, he spent one season with the blues, winning the FA cup in 2000.

He is well known as a manager for leading French outfit Monaco to the Champions League final in 2004 where they lost to Jose Mourinho’s Porto. He then took over at Juventus, who were in Serie B following their relegation due to match fixing. He led them back to Serie A immediately the following season, but parted them soon afterwards.

Guus Hiddink and Mancini are both out of contention after they publicly stated that they were happy with their present roles. The four man short-list is said to be comprised of Frank Rijkaard, Mark Hughes, Didier Deschamps and Luiz Felipe Scolari. If a manager of the class of Rijkaard is available you appoint him immediately. He is young, proven at the top level, plays attacking football, what more can you ask? If i were Peter Kenyon, I would definitely do that.