Grant ready to step down

in Manager News May 11, 2008 Comments Off on Grant ready to step down 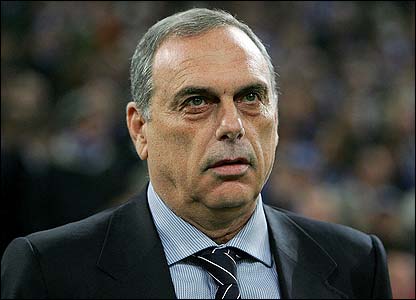 Avram Grant, The man who has led Chelsea FC to our first ever Champions League Final. A man who has transformed what could have been a hugely disappointing season into a position where we have the possibility of getting a double. This is a incredible turnaround particularly considering the conditions in which he took over.

He took over from one of the charismatic manager’s ever, who has won 6 titles in 3 years. We were in 5th position when he took over. Now we are 2nd based only on goal difference. The Press, Fans, and me too to a certain extent thought the he was not the right man for the job. But he has proved everyone wrong.

He has been under enormous pressure yet he has handled them brilliantly. But even now the press do not seem to be satisfied, mostly because you can’t headliners from him like they did from Jose. Frank Rijkaard, who has been linked with Chelsea was sacked by FC Barcelona and immediately the press have jumped upon saying that Grant is ready to step down to make way for Rijkaard. This is absurd. Why does he need to go after doing so well. I feel for him. He needs a chance to prove himself. Let him stay for another season and bring in his own players and let us see where we go, then a decision can be made.
2008-05-11
+Bharath Ram