in Squad Updates May 11, 2008 Comments Off on John Terry Injury update 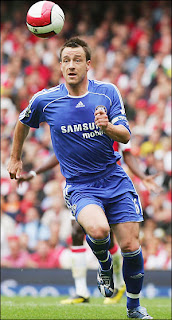 The greatest disappointment for all Chelsea Fans must be the injury of John Terry. He collided with Petr Cech and got himself injury early on in the match against Bolton. At that time it was feared that the injury might be serious but it has been confirmed that it is only a slight dislocation of the elbow and he should be back within three or four days.

After being at Chelsea since the start of his career, it will be huge blow if he were to miss one of the biggest match in the history of the Club.

Usually John Terry plays even if he is only fifty percent fit. Having him and Ricardo Carvalho, the best Centre back partnership is massive and essential for us in the final.