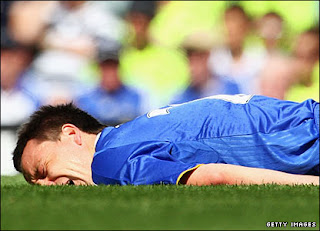 John Terry hoping to be fit for the Champions League Final
Chelsea 1 Bolton Wanderers 1
Chelsea Scorers: Shevchenko 62
Bolton Scorers: Taylor 90+2
Well it has finally ended, hasn’t it. After 38 games, the title according to me has been lost by Chelsea by 2 goals, yes 2 goals. I am sure that you’ll remember the late late goals by Heskey a few weeks earlier and today by Taylor. If we had stopped those we would have won the title.

Congratulations to Manchester United on winning the Title, but I will never say that they were the best team. I am not biased or anything like that, its just what I feel.

Going back to the game, everyone one knew that we had to win the game in order to have any chance of getting the Title. Bolton as expected sat back and allowed us to attack. I have seen that more often than not in these situations the 4-3-3 formation simply doesn’t work. The recent match against Newcastle would have been a very good example of it. Maybe it was due to lack of urgency. We did not create anything in the first half except for a few chances for Drogba, which on his day would have been easily put away. The huge disappointment of the game was the injury to John Terry, after colliding with Petr Cech.

Second half Grant rightly changed the formation to 4-4-2, bringing on Sheva for Makelele. We played better and got the deserved goal. But then the heartbreaking news of United’s second goal reached and then everything inside the stadium went flat and we finally ended up conceding another late goal due to a poor clearance by Alex. This was one of the matches that was certainly influenced by the proceedings elsewhere.

I am sure that we’ll strengthen next season and get the Title back. But for now all eyes on the final.