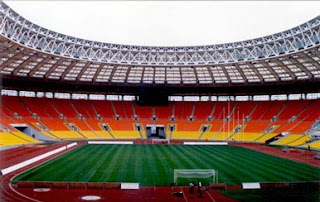 Chelsea take on Manchester United in the final of the biggest Club competition in the world, The Champions League. This match even though taking place in Moscow, looks like a home match as this is the place where Chelsea owner Roman Abramovich grew up as a orphan to make his billions. The match takes place at Luzhniki Stadium, Moscow in the same conditions as like last year’s FA Cup Final when United had won the league and we had only the league cup. This time around though the League Cup is also missing. In fact the Trophy Cabinet is empty this year. This might help us more since we head into the game hungrier of the two. If we don’t win the match then this would be the first trophy less full season since the arrival of Roman Abramovich.

Ahead of the build up to this game, Wayne Rooney and Nemanja Vidic have both come out and branded Drogba as diver in the same manner as Rafa Benitez, who before the semifinal said the same. We all know how he was left Red-faced after the match, seeing Drogba’s impressive performance. Lets hope for a similar fiery performance by Drogba. Chelsea’s line-up is all but known in a 4-3-3 with the only doubt being whether it will be Malouda or Kalou on the left flank. United’s line-up is the ony surprise with Alex ferguson having to decide whether to go with the usual 4-4-2 or the 4-3-3 they opt in the Champions League.

Slovakian Lubos Michel has been named as the match referee. He is the referee who awarded Liverpool the famous ‘Ghost Goal’ in the semi’s against us in 2005. Chelsea have lost both the matches that he has officiated in by a single goal margin. Will this be a third time lucky? Can we get our first Champions League Trophy? Wednesday’s match is sure to provide all the answers.