Mosow Heartbreak, but We’ll be Back 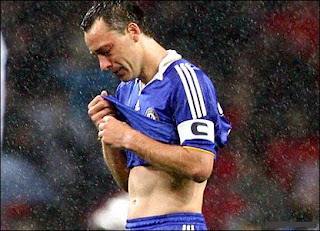 Manchester United 1 Chelsea 1 (6-5 penalties)
Man Utd Goals: Ronaldo 26
Chelsea Goals: Lampard 45
Sent off: Drogba 116
Well, the season’s over. Our last chance to get a silverware this season ended in disappointed. The way in which we lost was the most disappointing. Losing after the final whistle is one thing and losing in a penalty shootout is another. We were awful in the first half and could have gone into the break 3-0 down, but for some excellent keeping from Petr Cech kept us in the game. But he could not prevent Ronaldo from heading into the net. Then came a moment of fortune for us when Essien’s shot deflected of two Man Utd players and Lampard, like ever scored by his trademark runs. We had got out of jail. They had a plan to play Ronaldo on the left with Essien and it payed dividends. Essien is not a defender and he proved that. Lampard and Ballack failed to close down Carrick and Scholes and hence as a result of which they controlled the match in the first half.

The equalizer seemed to give us more confidence and we played far far better and were looking more likely to score. Avram Grant changed the way we closed down and it payed dividends, as we were the controlling team in the second half, Carrick and Scholes who were previously attacking were forced into defensive. Drogba had a superb shot which was prevented from going in only by the post. If it had gone in there would have been very little time for United to come back. But it stayed that way for 90 minutes and finally extra time came. 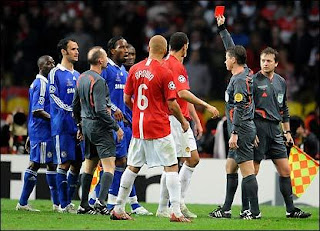 In extra time it looked like one of the days when nothing goes in for you when Frank Lampard struck the crossbar this time. Then in the pouring rain we allowed ourselves back into trouble when a unnecessary fight over a throw-in resulted in Drogba, possibly playing his last game for the club was sent off. Then match with tired legs out there looked like going to penalty shoot-outs, which is what exactly happened. Grant took off Makelele and brought on Belletti to take the penalties. 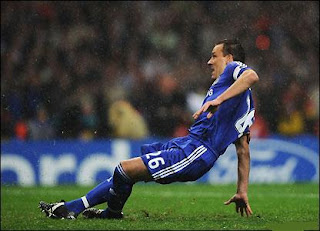 Penalties started and Tevez, Ballack, Carrick, Belletti all scored their the penalties. Ronaldo then stepped up only for Cech to save. The advantage with us now. Lampard then scored to make full use of the advantage. All others scored their penalties and finally it was down to the fifth penalty, John Terry stepped up to win it. But as luck would not have it, he slipped just at the wrong moment to see the ball go wide even though Van Der Sar had committed the wrong way. It simply wasn’t our day and the it finally ended when Anelka’s penalty was saved by Van Der Sar. John terry was left crying, thinking of the moments that we could have won it.

This was our first final and one can be sure that it certainly won’t be our last. Chin’s up. We’ll be back stronger than ever next year.