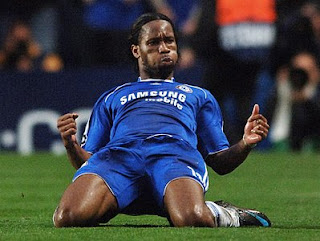 Drogba is in scintillating form going into the match

We face a resurgent Newcastle United on Monday evening knowing that after Manchester United’s 4-1 victory over WestHam United anything less than 3 points would see our title hopes all but over. The previous situation we were in a similar situation, was back when United had won against Arsenal and we needed to get 3 points against Wigan Athletic but we failed to do so after conceding a last minute Heskey goal. This is what happens when players are under pressure to get the points. Manchester United also slipped up when we were playing before them. They drew against Middlesbrough and Blackburn Rovers after we had won the previous days.

To complicate matters our record at St James Park has been very poor.We have not won there for the past 5 seasons, with three wins and two draws for Newcastle. This match also does not seem any easier as under Kevin Keegan they are enjoying a mini revival having not lost their past 6 matches. But we can be confident as all those opponents they have either beaten or drawn, baring Portsmouth are below them in the table or have nothing to play for. Last week they held WestHam united to a 2-2 draw at Upton Park. They are very good going forward as Keegan found a way to put up three strikers in the offensive formation with Micheal Owen playing a deeper role. As Newcastle have nothing to play for lets hope that they do us a favour since next week United have a chance to slip up as they are at Wigan and will be playing on their awful pitch.