in Transfer News May 23, 2008 Comments Off on Robinho Admits Chelsea Interest 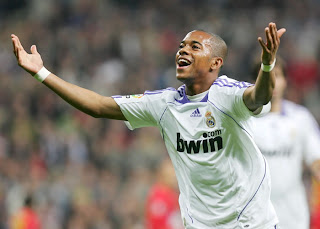 Robinho has admitted that he has an offer from Chelsea and A.C Milan. to Stamford Bridge, according to the player and his agent. Chelsea are prepared to pay £28million to bring Real Madrid star RobinhoRobinho’s agent has said,

“I met Peter Kenyon, Chelsea managing director, in London on Thursday. He told me that they (Chelsea) were considering making an offer of 35 million euros for Robinho.”

“What could happen is that I could go to Chelsea, as I have an offer from them,” Robinho added.

footballers is that when things are going well, they are fantastic. They party all day long but nobody complains about it. It is only when things don’t go according to plan that everything goes wrong. The whole team comes into the media spotlight for the wrong reasons. Stories which may not be true gets spread around. The best example of this can be Now, Robinho is a fantastic player, no doubt about that. But the thing with these brazilianRonaldinho and Adriano. Further is he really worth £28million. I doubt it. Maybe around £20m may be a fair evaluation.

On the positive note, he is truly a fantastic player with a lot of skills and pace. Plays in a similar position to Kalou. A good finisher. He is one of the few flair player who can fit into the 4-3-3 system that is in practice. Do you think he can be a success? I think so. But given the price there will be huge pressure on him.