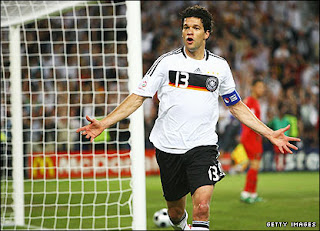 Euro 2008 is really heating up. In the first quarterfinal match Germany defeated Portugal 3-2 in a very exciting match. The Germans gained a immediate advantage not when Schweinsteiger scored but when the team line up was announced, because Mario Gomez wasn’t playing. So you are now already sure that no one in your team is not going to be there just to add numbers up. I haven’t seen a worse player than him in European Championships. So Schweinsteiger came in for him and produced a superb display by scoring one and setting up two. Ballack was controlling the game from the centre as ever and would have surely pleased our new manager, Scolari who was obviously frustrated by Ronaldo. He should know by now that Ronaldo isn’t the player who everybody hype up to and that he will probably score wonderful goals against Derby, Reading and so on

He has always gone missing from the big games and yesterday was yet another example. For the definition of a truly great player, one needs to look no further than Ballack, Zidane, Ronadinho in his prime and so on, but for God’s sake its definitely not Ronaldo.

Portugal were defending like Derby and it showed when they let a free header to Klose. For statistics, Klose has scored 11 goals in his previous major tournaments including this one and all of them have been HEADERS !!! Anyway ever since Ballack came back from injury back into the Chelsea side and started to play with his heart out, I have become a fan of him and I wanted him to win the title to overcome this season’s disappointments. They are certainly back on the right course now.

And in the roundup of other results, Spain defeated Greece 2-1 to send the defending Champions back home in a humiliating way. Russia were the ones who certainly caught every one’s eyes. They thrashed Sweden 2-0. Alright, 2-0 doesn’t sound like a thrashing scoreline but if you had watched the game then you would know that they could have easily scored 6 or 7 based on the quality of chances they created. Guus Hiddink, the coach of Russia whom we tried to lure to Chelsea FC has kept is record of getting all the teams he has managed past the Group stages of a competition. He did it with the Dutch, then spectacularly took minnows South Korea to semi’s or World cup 2002 and Australia to the last 16 in the last world cup.