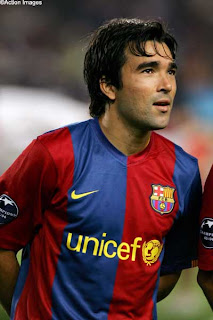 This rumour has been around for sometime and finally it is announced officially. Chelsea FC have signed Portuguese midfielder Deco from FC Barcelona for a fee of £8 million. He has signed a two year worth around £100,000 per week. This was one news that I was hoping that it would not come out as it now means that Frank Lampard, my favourite player will surely leave to Inter Milan. I don’t know the reason behind the replacement of Lampard. Has he not performed well recently ? No, the last three seasons he has scored over 20 goals a season from midfield. Does he cause any problems within club ? No, he is seen as one of the legends at Chelsea FC, why would he create any problems. I am truly disappointed.

Coming on to Deco, he is a classy midfielder. Any team would like to have him. He is a very good player and some of his vision for passing are exceptional. He can create loads of chances for the strikers if he is able to play at the same level he did for Barcelona a few years ago. He has plenty of experience in both Champions League and International level and so it will help us move closer to realizing the dream of winning the Champions League. And £8 million is not a huge amount for a player of his quality.

But at 30 he is not getting any younger. We already have Ballack, Lampard, Makelele who are over 30. What is the necessity to buy another player who is over 30. What happens to Micheal Essien then. Essien is miles better than Deco in my opinion. He may not have the class and trickery of Deco but his power and stamina are irreplaceable. In reality even if Lampard goes, I would have Mikel, Essien and Ballack in the central midfield of a 4-3-3. That is it. No more new signings. Youth and experience are in abundance. Scolari has his untouchables and so expect Deco to play every game. Very tough to see Essien staying at the club if it continues.

So, I think that Deco is a hasty and unnecessary signing. But he is a Chelsea player from now on and I welcome him with open arms. If he succeeds then we can surely get the Premier League back from Manchester United.

Thanks for image to UEFA.