in Internationals June 12, 2008 Comments Off on Croatia stun Germany 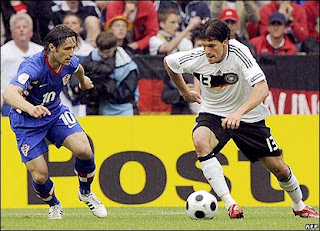 Image Courtesy: BBC Sport
Euro 2008 match day reviews continue again after a gap of two days in which I was not able to watch all four matches that happened. The most notable results were that Spain beat Russia 4-1 and Portugal beat Czech Republic 3-1. Co-hosts Switzerland are out of the tournament after a defeat to Turkey. Yesterday Croatia beat tournament favourites Germany 2-1 to produce the first shock of the tournament. They were very very lucky to do so. When the ball deflects of your teammate and hits the post and goes straight to the legs of a opposite number who just taps it in, then you know it is not going to be your day. That’s what happened when Olic scored. To be fair Germany weren’t good either. It was the same lackadaisical approach like against Poland and they paid the price for it.

Chelsea were reportedly after German striker, Mario Gomez. I really pray that we don’t sign him. He was so poor upfront that he could be blamed for the defeat. The game changed immediately after he was substituted for Schweinsteiger. Podolski scored his third goal of the tournament but that was not enough. I didn’t mention about our man, Micheal Ballack who was efficient as ever, though I felt that he didn’t come into the box too often to produce one of his trademark headers. I also don’t understand why a talented forward like Podolski is wasted by starting him in the left wing.

Germany’s next game is against Austria. If they win that they would go through. Today it is the ‘Group of death’ matches with France taking on the Dutch and Italy against Romania.