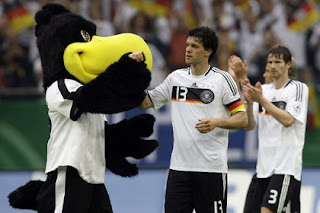 On the opening day of the tournament all the Chelsea players emerged victorious, with the Czech’s beating the Swiss 1-0 and Portuguese beating the Turks 2-0. Petr Cech was the Man of the Match in their game, proving once again that he is the best keeper in the world by making some excellent saves to help them to victory. All three Portuguese defenders of ours, Bosingwa, Carvalho, Ferreira played in their win.

Today its the mighty Germans who face an injury stricken Poland. Micheal Ballack is the captain and is a sure starter. Germany are the favourites to win this match. The other match is between Austria and Croatia in which there are no Chelsea players taking part.