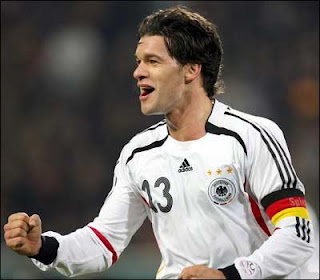 Micheal Ballack’s Germany side cruised through to victory on their first match of the tournament with a 2-0 win over Poland with Polish born Podolski scoring both the goals. Though Ballack didn’t get on the score sheet, he was influential in the match and only a superb save from the Poland keeper stopped him from doing so. The other
match was Austria against Croatia in which Croatia won thanks to a 3rd minute penalty from the new Tottenham man and once our transfer target, Luka Modric.

Tonight its the big matches from the group of death. Italy take on the Dutch and France are against Romania. For everyone who thought that selling Arjen Robben to Real Madrid was a poor decision after watching their last few games, think again. That’s because Robben is injured AGAIN. Italy has defensive concerns ahead of the match with Cannavaro out due to injury and his replacement Panucci also struggling due to injury. Romania has our old boy, Adrian Mutu who has scored 17 goals in the last 20 matches for Romania. Anelka is likely to be on the bench for France while both Makelele and Malouda will start.