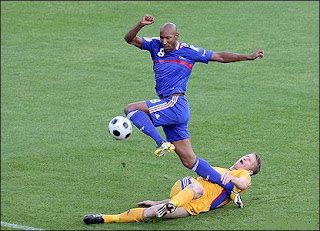 France kicked off their campaign with the dullest of dull affairs against Romania with all our players starting. It was so painful to watch that I could have switched off my television and gone off to watch paint dry. Even that could have been more interesting. The whole game had ONE shot on target from both teams. ONE ? What was that all about ? If you look at the players out there on the pitch, Ribery, Benzema you will think that there could be goals in this match. Scoreless draws do happen. But I have certainly seen scoreless draws which are entertaining. Enough said of this match I think. France have no chance to go through if they don’t improve.

The only consolation from today’s matches was Italy’s game against the Dutch in which the latter won 3-0. The way Dutch play is often called ‘Total Football’ and it was certainly that today. Their movement when they did not have the ball was astonishing. Before the game everyone were not entirely convinced with their defence but today against the World Champions, they have kept a clean sheet !! Sneijder, Van Nistelrooy and Van Bronckhorst scored the goals. Italy are in a precarious situation now having to win their remaining two games to have any chance of qualifying. I had my bets on Italy or Germany winning the tournament and I still believe that Italy will go through.