Will Arshavin come to Chelsea 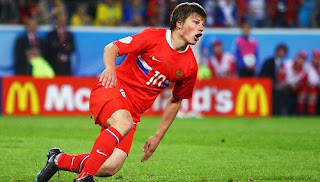 Who is the best player of Euro 2008 so far ? Wesley Sneijder, David Villa, Micheal Ballack, Podolski ? No, none of those. Its Andrei Arshavin, Russia’s No. 10. He has played only in two games so far and already he has skyrocketed in terms of popularity. So who is Arshavin ? Why is he linked with all the top clubs in Europe ? For that you just need to look at his last two games for Russia. We were the first ones to be interested in him back when Avram Grant was in charge.
are that we are indeed going to sign him.

Reasons why must we sign him immediately
1. He is a fantastic player.
2. Has lots of pace and trickery which is handful to any defence.
3. Will cost only £10m due to a release clause in his contract.
4. Abramovich wants to bring a fellow countrymen to the club

Reasons why he shouldn’t be signed
1. In the same built as Luka Modric so it will be difficult to predict if he can cope with the physical nature of the premier league
2. At 27 already he is not going to get any younger.
3. He is the highest paid player in Russia at nearly £60,000 per week so will expect wages of nearly £100,000 per week which isn’t cheap.
4. Doesn’t really fit into Scolari’s 4-2-3-1 formation.

So do I think Chelsea should sign him ? No, He is good but we don’t really need him.