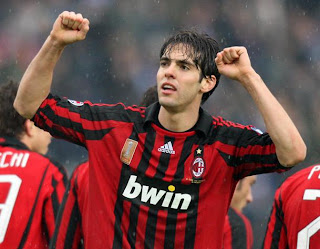 AC Milan last night rejected a massive offer for European footballer of the year, Kaka. Chelsea have been interested in bringing Kaka to Stamford bridge for sometime now and they moved officially for the first time with a bid believed to be in the range of £50 million. This would make Kaka the biggest transfer in the history of football had the deal gone through. But strangely AC Milan choose to reject the bid in spite of their financial difficulties caused due to their failure to qualify for the Champions League this season.

“For Kaka, an astronomical offer has arrived from Chelsea.”

Galliani said. The big reason for Chelsea’s enormous interest seems to be now down to the new manager, Scolari. The Brazilian desperately wants to bring his fellow countrymen. But Kaka has mentioned several times that he intends to stay at Milan for a long time but the prospect of playing in the UEFA Cup next season and coupled with the huge wages that Roman Abramovich can provide it will surely be very tempting for him.