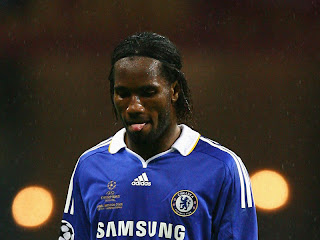 1) The rumours about Drogba leaving has started again with Drogba’s agent claiming that he would consider a move to Real Madrid. Whether Real Madrid do really want to sign him when there is already Raul, VanNistelrooy and Robinho in their squads. One possibility could be a straight swap with Robinho. There is also the possibility of reuniting with Jose Mourinho at Inter Milan. This news comes after Scolari had reportedly told that he doesn’t Drogba but wants Samuel Eto’o. Drogba could be sold to fund a move for Eto’o.

2) I discussed previously in one of my previous posts if we needed Arshavin for the squad. Well, Roman Abramovich certainly thinks that way. Reports in Russia have emerged that both Chelsea and Barcelona, a club which Arshavin supports have had their bids accepted. But Chelsea are believed to be in pole position to sign the play maker for £12million.

3) Frank Lampard may not move to Inter this season according to Jose Mourinho. The former blues manager has said that he does not expect Lampard to be reunited with him this season but is pretty confident that he’ll surely join them next season. Lampard is currently on a holiday in Italy.

Image thanks to Sky News.