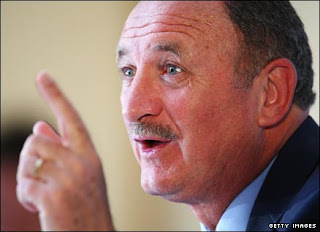 Scolari was unveiled amid huge flashes from cameras yesterday as a new era for Chelsea FC dawned. Scolari has already interacted with the players when the pre-season training began at Cobham training ground on July 1st, 2008. Scolari answered to the reporters question in very good English much to the surprise of many. He answered questions regarding the futures of Didier Drogba and Frank Lampard and also whether there will be any more new signings at Chelsea this summer. About Lampard’s situation he said

“I was very happy because I asked if he wants to stay and he said ‘yes, I will stay at Chelsea’,”

This is after Chelsea FC confirmed days before that it has had an OFFICIAL offer for Frank and that it had rejected it. Lampard is holding out for wages of nearly £150,000 per week which to be FRANK is quite huge. Whether Lampard stays or not does not depend on Scolari or Inter Milan but on Chelsea FC whether they are willing to offer such a huge to a man who is 30.

Regarding Drogba, he said that he expects Drogba to stay at Chelsea and that he is one of the best players in the world and features no 100% but 200% in his plans.

Regarding new arrivals in addition to Deco and Bosingwa he kept his cards close to his chest and mentioned that he wants to see the players more before deciding on who should be brought in and who should be allowed to leave.

Scolari joked a lot and even called him the ‘special one’ but that was only to his family and friends. He had the unmistakable aura and arrogance of JoseMourinho but at the same time had the silent and understated character of Avram Grant.

Whether he’ll be successful or not is a question the future will answer, but for now he seems to be one heck of a character who will certainly make the Premier League and Chelsea colorful.

Thanks for image to BBC.