in Miscellaneous June 28, 2009 Comments Off on Deco slams Roman 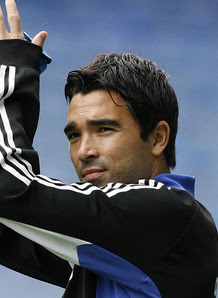 Sorry guys, I have been away for a while and have since not been able to update the blog. But now I am back and lets get on with what is going on in the latest transfer market news. Signed by the Scolari as one of his untouchables for £8 million from Barcelona, his first two games were outstanding for us but ever since he got injured in the warm-up during the Manchester United
match he has been absolutely been rubbish. After Hidding took over from Scolari he has been a regular bench warmer. So it would not be a complete shock to us if he left the club after such a miserable season. Jose Mourinho now at Inter has recently revealed that he would like to take Deco to Inter. Deco also revealed that he wanted to leave the club.

Now Deco has come out and said, “Chelsea are kind of his toy. Sometimes Abramovich makes decisions that go over the head of the director of football.”

Everybody knows that Abramovich sacks managers pretty quickly when things don’t go properly. But come on, should Scolari be given more time in the situation we were in during february. We could have finished out the Champions League qualification places, we could have had a second consequtive season without a trophy if Scolari continued. The FA cup victory clearly would not have been achieved if not for Hiddink.


So Deco we don’t need you to tell us how good Roman is. So instead why don’t you pack your bags and leave.