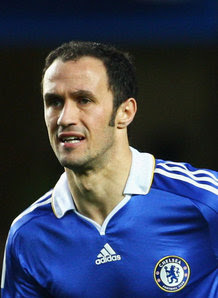 Carvalho is regarded as one of the finest centre half’s in the world. No wonder when we signed him from FC Porto back in 2004 for a huge fee of £19 million. He has re payed that fee over the years by his awesome performances which have led some to say that he makes John Terry look much better than he actually is, although I do not buy into that.
But a time comes when all good things must come to an end. And in Carvalho’s case it certainly has come true. He is a great professional who always gives a hundred percent every time he plays. But last season has to one of his worst having made only 18 appearances altogether and after recovering from one injury he stumbles over blades of grass and then falls injured again. This has been the case throughout last season.

Now, he could have worked on his fitness and come back stronger to get a place in the team. But instead of doing that he has been moaning all through the summer break about how he was treated badly by the club. Now what does he expect the club to do ? Play him while he is injured ? NO. Seriously what can you do with a injured player ? Except from providing medical experts and fitness coach they cannot do more than that. He should know that. Ok, Maybe he wants to leave. In that case why don’t you just hand in a transfer request and go. Only players who want to play for the club should stay. I would sell him in any case. He is 31 and selling him would represent a good business decision. There is always Alex, Ivanovic and young Micheal Mancienne ready to step up.

Chairman Bruce Buck has come out and said that he expects to sign at least one marquee signing this summer. He has also stated that we won’t be spending unrealistic prices on them. As of now there are very limited options in that niche market even if you have the money. That is partly due to the entry of Real Madrid into the market. Star names such as Kaka, Ronaldo and Benzema have all moved to the bernabeau. Very few such a Messi (who won’t leave Barcelona), Ribery (Seems like Bayern won’t sell him) and Villa (Nobody knows what is the situation with him) and Pato who seems to be the best possibility. Not much options in it. Hope we sign somebody in that list.