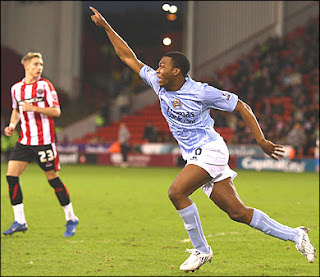 Seems like Kenyon and others at Chelsea FC have read my post a few days earlier where I was groaning about the lack of transfers and quite a large number of other blog’s as well. So now we make two signings within a matter of days. Daniel Sturridge becomes our second signing of the summer. He comes in on a bosman free transfer although we will be
paying a fee of around £5m as he is under 24. This is a signing which won’t raise eyebrows although he is talented and young. I would prefer Di Santo over him because he is a player who can be moulded into another Drogba if he bulks up. I do not know where Sturridge is going to fit in personally. I am just hoping that they won’t put him in the reserves and waste his talent.

And regarding other news, it is reported that Manchester City have offered John Terry £300,000 a week which is double the wages that he currently earns with that. My confidence in John staying with us is decreasing everyday. Last January I thought that it would be impossible for him to leave. Now though there is every increasing probability that he will leave. If he does leave then it is important that we get the best value for him. A transfer fee of £30 million is a joke for a player like Terry. Given his importance to the club and team it would be appropriate to demand at least £60 million. Although I would hate to see him go, £60 million is quite a sum of money to ignore.

Yuri Zhirkov the Russian playmaker who plays for CSKA Moscow looks to be our next signing. It is reported that he will come to London next week. Good player who can replace Ashley Cole in the left back spot. That is because Ashley Cole seems to have rejected a new deal at the club and is being targeted by Real Madrid. He is demanding £130,000 a week and he is a left back. The meaning for greed in the dictionary has to be Ashley Cole. Has the world gone mad ? I know that he is one of the best left backs in the world but if a left back is demanding that much money what would it take to sign a top quality striker ? £1 million a week ? No chance. I’d say that we sell him, get the cash, buy Aly Cissokho from Porto.