in Transfer News July 6, 2009 Comments Off on Yuri Zhirkov Signs 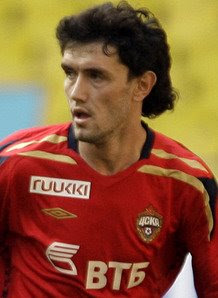 Chelsea FC have completed the signing of Russian Yuri Zhirkov for a fee of £18million today. He is our third signing after Daniel Sturridge and Ross Turnbull. I saw him at the Euro’s and he looked very good playing for Russia. Ancelotti in today’s press conference
where he was unveiled to the press said that he can play either in midfield or in defence. I am happy that we have finally spent some cash for this summer. I am expecting Zhirkov to be a good signing as he is mid-way through the Russian season now, so he probably doesn’t require pre-season that much. If he is as good as thought of then we can probably offload players like Kalou who simply have not turned into what we expected when he joined as a 20 year old.

Ancelotti was today unveiled to the press today as I mentioned above. I have to say that his English is no better if not worse than Scolari’s English. I just hope that everything goes well because even though language was a problem for Scolari it was not the only problem he had. For example, not having men at the posts while taking corners does not require knowledge of English. I simply requires some tactical knowledge like Guus Hiddink.

Coming back to Ancelotti, his first job has to be convincing Terry to stay because according to some reports Terry has his head turned towards City now after it was revealed in THE SUN that Terry and Manchester City manager Mark Hughes were staying and dining in the same hotel. That is one news I did not want to hear. Terry has not come out and said that he does not want to leave. Maybe he is actually encouraging the interest to get himself a pay rise from the £130,000 a week he already is on ! Or he must be actually interested. Either way he will not be handing a transfer request which will mean losing the loyalty fees that he will be due having stayed for such a long time at the club. The only way he will be leaving the club in a dignified manner is if the club accept a bid, which I hope they don’t.