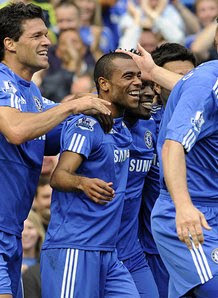 Four wins out of four and a delightful way to head into the international break knowing that Chelsea are on top of the table. In a breathtaking show of attacking football, Carlo Ancelotti’s men brushed aside Burnley. Burnley on the back of wins against Manchester United and Everton offered little answer to the crisp passing and movement of the
Chelsea midfield four of Ballack, Lampard, Deco and Essien. The match started in a rather bad way with Lampard conceding possession too easily near the defending third but Burnley forward, Paterson failed to find the net when one on one with Cech. That served as the wake up call for the players and the game never looked back from there. Had it not been for Burnley’s goalkeeper, Jensen the game could have produced more goals for Chelsea. Anelka could have scored a hat-trick and Lampard a couple had it not been for Jensen.

Drogba was back to his best and was the creator for the first goal when he passed to Anelka for a tap in just before half time. The breakthrough was crucial as it seemed that Jensen would single handedly save Burnley from defeat. Another early goal by Ballack soon after the start in the second half from a cross by Lampard put the game beyond Burnley. The third goal by a very unlikely source, Ashley Cole was the icing on the cake. After a one two with Lampard, Cole struck in a thunderous volley to seal the three points.

On the negative side, Anelka’s lazy game could have caused us losing points against better opposition than this. Anelka could have had a hat trick but his poor touch, lazy play and poor finishing nearly cost us. There were at least three or four times in the match when he was robbed of the ball when not knowing what to do next. There will surely be harder tests than this and if we are to take three points from them as well then there must surely be improvements.