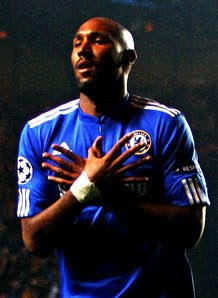 Nicolas Anelka scored the only goal of the game on a rain soaked night at Stamford Bridge against the Portuguese Champions, FC Porto. The game hardly matched the performance shown by the players in our last five straight victories which have taken Chelsea to the top of the table. That could have been probably down to the rain soaked pitch and to a much larger extent, Didier Drogba who was missing due to the suspension awarded by
UEFA for his protests after the Barcelona semi-final last year where Chelsea were subject to much debated injustice.

Even though the game was not beautiful to watch there were plenty of chances created by both the sides and thus requiring Petr Cech to be at his best to keep Porto at bay. The best of the chances for Chelsea fell to Lampard and Kalou with both their headers requiring the error prone Porto goalkeeper, Helton to be at his best. But the most important chance fell to Anelka, who after seeing his shot saved by Helton slotted in the rebound in the tightest of the angles.

In the group stages it is all about winning hence the performance would not have worried Ancelotti too much. But the team has to certainly improve if progression in the latter stages of the competition is a must.

Peter Kenyon is to leave his post as the chief-executive of the Club at the end of October, it has been announced. Though he certainly did great things for Chelsea he will be best remembered for constantly stressing the fact that the club will be self sufficient every year but never really coming close to achieve. His departure from the club was inevitable ever since his diminishing role in the club starting with the sacking of Scolari and Arnesen’s promotion to sporting director in the beginning of summer.

There has been constant speculation linking him to Manchester City after the sacking of Scolari. Some of the good things he will be remembered by Chelsea are his involvement in making Chelsea a European force within what seemed a relatively short time as he was the main man behind the signings back in the Mourinho and Ranieri days.