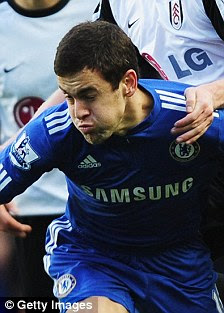 Joe Cole set to start
The last few weeks have been not so good for Chelsea having seen us lose the top spot to Arsenal first and then to Manchester United. Even though we have games in hand over our rivals, it is always better to be having points on the table rather than games in hand. So, Birmingham are the next visitors to the Bridge and it gives Chelsea a chance to go second in the table knowing that Manchester United won’t be playing a midweek league match due to the involvement in the small matter, that is a league cup semi-final between Manchester City. Arsenal are starting a difficult run of fixtures starting with the match against Aston Villa tonight. And if things go our way Chelsea could return to the top of the league.

That said, the match against Birmingham is not a easy one as it looks on paper going by Birmingham’s last few seasons in the league where they have either struggled with relegation dogfight although the season or been relegated. But this season, under new owners they are now on a 15 match unbeaten run. A run that included games against Chelsea and Manchester United. Indeed the last match Chelsea played against Birmingham ended in 0-0 draw and that signified City’s approaches to games now. Solid and not conceding seems to be the mantra, though much of it has to be credited to the brilliant Joe Hart, who is one player Chelsea need to be looking at given the frailties of Petr Cech in recent months.

For tonight’s game Ancelotti has pretty much the full squad to choose from with the exception of Belletti who was injured in the FA cup match against Preston North End. One relief for Carlo Ancelotti is that Frank Lampard is fit again after being taken off in the same game with what looked to be a muscle injury. Drogba and Kalou have arrived from the Africans Nation Cup though this match should come a bit too soon for them. Ancelotti has stuck to the policy of naming the starting line-up though no one has a clue to why he is doing it. And no surprises there as Ashley Cole, Carvalho, Joe Cole and Malouda return to the line up.

Image thanks to : Dailymail and Getty Images
Type rest of the post here