in Match Preview January 30, 2010 Comments Off on Burnley vs Chelsea Preview 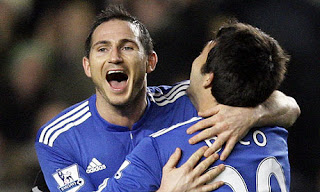 Starting at the third spot before the game against Birmingham things looked not so promising for the blues. But what night it turned out to be given the results going elsewhere at Aston villa and Old trafford. The victory was even sweeter given the fact that Birmingham were on a 13 match unbeaten run. But the Blues made them look like a sunday league team with our passing and movement. There were times in the first half when Birmingham just couldn’t touch the ball.

Ancelotti must be given credit for switching to the 4-3-3 formation which has been the clubs formation for many number of years and the players seem to be liberated by that. Lampard seems to be back and is now on 13 goals for the season, well on course for another 20+ he regularily gets. On wednesday night Deco was playing in a sort of a holding role and watching him was an absolute delight. Some of his touches to get away from people were just to remind people of the deco from Barcelona that we all know. Joe Cole had his best game since returning from injury. Even though he did not score he was involved in two of Chelsea’s goals tonight. There is another headache for him as Drogba comes from the african cup of nations. Does he continue with the 4-3-3 or does he go for the diamond ? Can he leave out the likes of Malouda and Joe cole after they have been performing so well ?