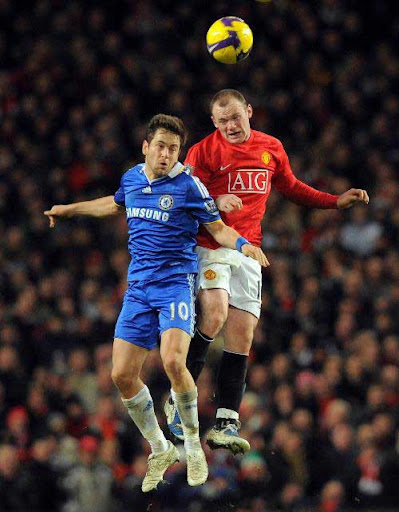 It does not get any bigger than this. The Title decider. The match has lost some of its gloss though with the news that Rooney and Drogba are major doubts for the game. Even though I want Chelsea to win, I also want to see the best players on the field in the big matches. That is what big matches are all about. Best players, great atmosphere and lots of goals (hopefully). For example, watching Real Madrid vs Barcelona without Ronaldo and Messi is like preparing to go on a date with Angelina Jolie only to learn on the last moment that she is ill and you have to go out with some girl around the corner.

Chelsea go into the game in the best possible manner, full of confidence. That comes from having scored 12 goals in the last two games. Manchester United on the other hand come on the back of a disappointing away defeat to Bayern Munich. And more importantly, Rooney gets injured. Though the extent of the injury is still
unclear, it is likely that he will miss two to four weeks. Rooney has been the one player who has been scoring for United. Look at the statistics, Rooney has scored 34 goals this season and the next best goalscorer is OWN GOALS at 11. To be saying that Rooney has carried Manchester United this season is a massive understatement. He will be a huge loss to them.

While Manchester United have only the Rooney injury to be concerned with, Chelsea on the other hand have to cope with injuries to Ashley Cole, Bosingwa, Ivanovic, Carvalho and Essien. That is like nearly half of the defence out. While picking the defence should not be a problem for Ancelotti, because it picks itself, selecting the midfield and the attack will give selection headaches because the team has been playing very well with the lone striker in a 4-3-3 formation for the past two games. Does he go about tinkering something which is working well ?

More importantly Drogba seems to be a doubt for this match as he has sat out of last two training sessions. If he is not fit then it should be a major blow for Chelsea, or should it ? Drogba has oddly scored only once against Manchester United in the 6 years that he has been at the club and that was in the FA cup final in 2007. He has never scored against them in the Premier League. Maybe if Drogba does not play in this game then it will actually be a blessing in disguise. If he is fit, it is definitely going to be Drogba leading the attack. The question is whether Ancelotti plays Anelka alongside him in the diamond formation or puts him wide in a 4-3-3. Both formations seem to be good unlike the Christmas tree formation which never really gave us anything.

Three players give Ancelotti more problems than any other. Deco, Anelka and Joe Cole. Deco has been simply fantastic in the last two games. Looks very much like the player we bought from Barcelona. On the other hand Ballack has been truly disappointing of late. But either Deco or Ballack will be up against Fletcher who is very physical and tries to injure a player everytime he goes into a tackle. When you look at who will be able to cope with that kind of physicality, you have to say it would be Ballack. Maybe Ballack can start the game and if needed Deco can be brought on from the bench.

Eventhough winning is a huge priority as it will take us to the top of the table, avoiding defeat is as much important. Because a defeat effectively ends our title hopes with only 6 games left. A draw is not the worst result but that will play into the hands of Arsenal who were lucky to come out with a 2-2 draw against Barcelona on Wednesday night.

My Prediction: Chelsea will be too strong for Manchester United this time around. Especially with the team playing very well, I’d say Chelsea to win 2-1

NEWS UPDATE : Drogba is passed fit and will start