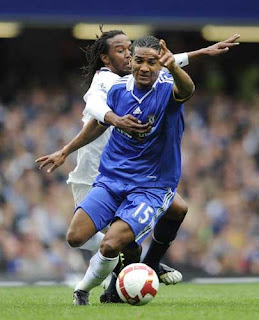 The game against Bolton might not be as easy as Sir Alex Ferguson said but the title race will surely become easy should Chelsea win this game thereby going four points clear of Manchester united in the title race. It was classic Fergie in coming out in the aftermath of their draw with Blackburn and saying that he expects Chelsea to have an easy game against Bolton. He knew that by saying so, he will spur up Bolton into getting a result at Stamford Bridge. But I am sorry Fergie it is not going to happen. Because Ancelotti would have told his players the simple fact that, just win this game and the title is nearly won. The players will also be fully confident from the recent results having comfortably seen off the likes of Manchester United and
Aston Villa. I am just hoping that Chelsea are just not over confident, because we have been in similar situations earlier this season and we have failed to take advantage of it. The loss to Wigan earlier in the season is perfect example where we have dropped points to teams which we should be beating easily.

Owen Coyle replaced Gary Megson half-way through the season with the club in the relegation zone. He has brought a change in Bolton’s fortune after a difficult start. They now lie 5 points from the relegation zone. That is a good enough lead to be having with few games left to play in the season. So, he has justified his appointment in place of Megson. On the field though, he has not changed the way Bolton play. It is still the ‘lump the ball up to Kevin Davies’ formula. A carbon copy from the Sam Allardyce day’s when they were quite physical. But he has made some modifications by adding a slight subtleness with ball players like Jack Wilshere who is on loan from Arsenal till the end of the season. Expect him to play a role at Stamford Bridge as he was quite impressive in their 4-0 home defeat against Manchester United.

Bolton’s away form has been poor though. They have won only one of their last 6 away games and that was against Zola’s West Ham. Bolton’s saving grace this season has been their home form. They concede quite a lot of goals, easily going down by 3 or 4 goals. Chelsea on the other hand have lost only 5 points at home all season. The only points dropped were to Manchester City and Everton. But this fixture has proved to be a potentially tricky fixture in recent years, right from the Allardyce reign, during which we lost some crucial points which came to bite back in the title race. I am hoping that it is not the same this time around. As regards to the game, there won’t be any major changes to the Chelsea side that beat Aston villa a few days ago to reach the FA cup final where we will play Portsmouth managed by former Chelsea manager, Avram Grant. But Ballack and Anelka can be expected to come into the starting lineup in place of Deco and Joe Cole to cope with the physicality.

My Prediction: Chelsea to win 3-0