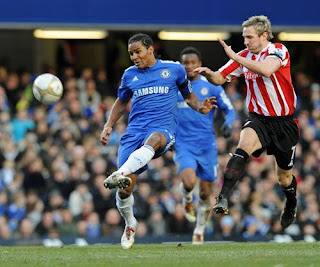 Every Chelsea fan knew before Saturday that we cannot expect any help from Tottenham who were playing Manchester United because what they perennially do at Old Trafford is get thrashed. This time around it is no different as they lost 3-1. That means that United are top of the table as of now and that we have to win our game in hand against Stoke to go back on top again. With only 2 matches remaining after the stoke game, any slip ups at this stage of the season means that you can never recover. If Chelsea drop any more points, then it is the title virtually conceded. I am sure the players and Carlo Ancelotti know that and they will be trying not to repeat the performance against Tottenham last weekend.

There are certain teams in the premier league, who I think do not help in the image of the league. Stoke, Bolton and Blackburn to name a few. Perhaps it has to do more with their managers than the clubs itself. There is not a single reason why you would pay money to watch teams managed by a
Sam Allardyce or a Tony Pulis. But that is what many Chelsea fans have to do this weekend when Chelsea entertain Stoke at Stamford Bridge knowing that if they win the game we go to the top of the table. There are two dimensions to Stoke’s play. Take a long throw-in with Rory Delap or cross the ball from the left into the penalty box through Matthew Etherington. That pretty much covers what Stoke are going to do this weekend. Stoke are coming on the back of a 2-1 loss at home to Bolton so they should be fired up. We beat them 2-0 at home earlier in the season in the FA Cup quarter-finals.

That said Chelsea didn’t deal with that particularly well when Bolton came to Stamford Bridge. But to be fair, there have been a lot of injuries that Ancelotti has to cope with recently and he has done well considering that fact. For Stoke’s visit, Chelsea are likely to have Ivanovic and Ashley Cole back. John Terry is suspended for this game after being sent off against Spurs although he will unlikely to be missed given the way he has played over the last two games against Bolton and Tottenham. But Mikel is out injured and will miss this game. It is unsure as to whether he will miss the rest of the season. That is a major blow as we don’t have any specialized defensive midfielders currently fit. This makes the news that Essien will not make a comeback as reported by some newspapers and will miss the rest of the season a huge blow. With a huge game against Liverpool looming next week Ancelotti will be praying that Mikel shakes off the injury as you really don’t want to see Gerrard making a fool of Ballack as the German, who is most probable to play there is one of the slowest on the pitch. There is also the option of Belletti if Mikel doesn’t make it.

Ashley Cole returning is a huge news but I really hope that Zhirkov is not dropped to the bench for Cole because he has done remarkably well in his absence and is showing the kind of form that made Chelsea pay £18 million to CSKA Moscow for him back in the summer. Ferreira at right back is another area where we could suffer given his last week’s performance but injuries mean that he is likely to continue. Drogba has been saying recently how his hernia problem is causing him trouble so if he is dropped in favour of Anelka it should not be a big surprise. We do play better with Anelka anyway. Joe Cole could also be dropped after a few week performances.