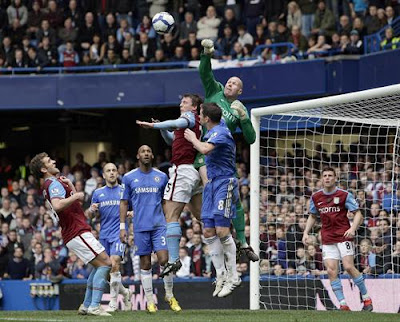 The FA Cup is always a special trophy for Chelsea having won it 5 times during Abramovich and pre-Abramovich era. And for that, Wembley always feels like a second home to Chelsea. It was also the first trophy that Chelsea won after Jose Mourinho left us and thanks to Guus Hiddink for that. Now we have a chance to win it for a sixth time.

Semi-finals of a cup competition are never going to be easy games. But we could have certainly got an easier draw in the form of Portsmouth. But it is Aston Villa, the team we thrashed 7-1 last week. Unfortunately the game is not going to be easy as last time around because
up until conceding the third goal, Villa were good worth for their money. It was only when the fourth goal went in, did they drop their heads and capitulated.

Villa manager, Martin O’Neill will have them fired up for this game to have revenge for the thrashing by Chelsea and also to the Carling Cup final defeat that they suffered earlier in the season to Manchester United.

But the deciding factor will obviously be the pitch. Sir Alex Ferguson and O’Neill criticized the pitch the last time they played but it seems to have been re-laid since then. How the pitch will behave is a mystery. If the pitch is as bad as the pitches previously played upon, we can expect a dull and boring game. Hope that is not the case.

Villa come into the match with their legs worn out, which is always the case with Martin O’Neill’s team in the later ends of season. Their most impressive player this season, Milner was a doubt to the game with an Achilles injury, but seems to have recovered in time to play. The injury situation for Chelsea has not changed with pretty much the same players available.

There is another big incentive for the Chelsea players. Help Ashley Cole win a sixth FA Cup winner’s medal. It has never been achieved before in the history of the FA Cup and that is a big thing to say. Even though currently injured, he will more likely be fit by that time around in case we make the final

There will likely not be any major changes from Aston Villa although we can expect Anelka to be dropped back to the bench in favour of Drogba. Anelka hasn’t scored since Drogba came back from the African Nations Cup.

My Prediction: Chelsea to win 2-0


What do you think will happen?