Chelsea are through to yet another FA cup final and Drogba scores yet again in a final. He is really the man for the big games, isn’t he? Chelsea make it into the tenth FA cup final in the club’s history. That is the kind of record that every English club would die for. We are still in a chance for our first League and FA cup double.

Though this was not like the hammering two weeks ago it was yet another comprehensive win. But things didn’t look bright in the first half. What a poor first half. Drogba comes into the side for Anelka and immediately we start playing poorly. It must be the poorest first half display since we went out of the Champions League. Pre match all the talk was about our 7-1 hammering two weeks ago and it felt like that Villa were on a revenge mission. And it certainly felt
like that for the first 25 minutes.

Drogba who has scored 31 goals this season was poor by his standards in the first half and that made the whole team look poor. He failed to hold the ball up and bring players into the attack. But after 30 minutes or so we started having possession and the game became more balanced.

The second half was simply superb from Chelsea as we stormed through. I have no idea what Ancelotti must have said in that dressing room but the players came out with the same hunger that has flown through the team in recent weeks. And as Drogba came back to life, Chelsea came back to life. From a corner, Terry scuffs a shot for Drogba to pounce and score with his left foot. A striker’s finish. From then on in, it was all one way traffic with Villa having to push men forward in search of the equalizer. 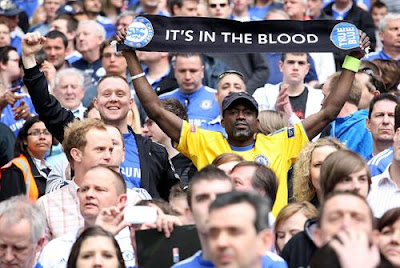 It was a question whether we will take our chances on the counter attack. And yes we did. Ballack floating a superb cross into the six yard box and Malouda pounces to score his 14th goal this season. Yes, 14th goal. What a remarkable season he is having. Then it was the time for the icing on the cake. Lampard literally runs from one box to another, gets a pass from Anelka, takes a touch and slots it beautifully home. A superb goal scored by one of the best midfielders in the world.

There were moments in the game for Aston Villa also. Agbonlahor went down in the penalty box under a challenge from Mikel for what looked like a clear penalty. Ancelotti never complained against refereeing decisions. He always has been saying that he accepts the referee’s decision and I suspect that he will do the same this time around. Villa have looked leggy of late and it showed in the second half. There was only one winner when Chelsea opened the scoring.

My Man of the Match:

There are very good shouts for the Man of the Match in this game. Cech, who was came for every cross and commanded the penalty box. Drogba for scoring at Wembley yet again. Lampard for his tireless runs and super vision. But it must go to Alex. He was simply brilliant at back. To be fair, he has been brilliant ever since he returned to the squad a few weeks ago. He has continued where he left off last season. Brilliant.