Inter Milan knock Barcelona out of the Champions League

Inter Milan give Barcelona a taste of their own medicine. God, I feel so happy now. To see everyone related to FC Barcelona cry and feel hard done by, makes me so so happy. The feeling is made even special because Jose Mourinho (who was actually working undercover for Chelsea last night) is the man behind
Barcelona’s pain. 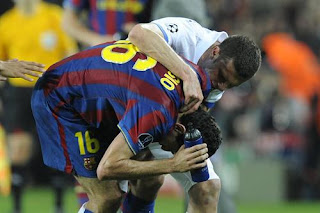 I don’t know why Barcelona are called the best team in the world. They should be called ‘Best Cheating team in the World’. Sergio Busquets, yesterday appeared to take a knock on his face by Thiago Motta and went down holding his face. There was no great contact between the two players and it was later proved by the image in which Busquets was seeing the events taking place and was waiting for the referee to show the red card. 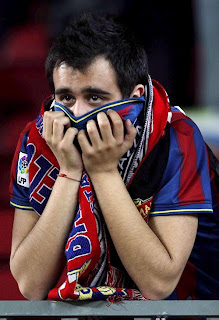 Busquets, you got what you deserved. I feel so glad for that.

This post is a celebration of Barcelona’s defeat and dedication to the incredible tactician named Jose Mourinho or ‘The Special One’. Goes some way in easing the pain of last year when Barcelona cheated and undeservedly went to the final ultimately winning it.

Can Chelsea Cope without John Terry Against PSG?