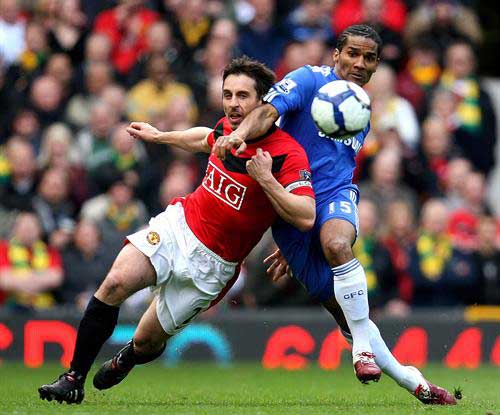 What a result for Chelsea. A Massive, massive win. Not just in relation with this match, but also for the fight for title between Chelsea, Manchester United and Arsenal. With just 5 games remaining and two points clear at the top of the table, Ancelotti will be able to smell the title. Manchester United will be wondering what has hit upon them after two consecutive defeats to Bayern Munich and Chelsea. United were without the best player, Wayne Rooney.

But the big news before the kick-off was that Drogba was missing from the starting line-up. It was the same team from last weekend and from the word go, it was all Chelsea. We looked very much the sharper team of the two. Controlling the ball for long periods. And there should have been doubts as to who were the home team. We continued to create chances and in the 20 minute up-stepped Joe Cole. Malouda, yet again the
creator, shrugs off challenges from Fletcher and dribbles past Ferdinand and puts the ball into Joe Cole, who from two yards out flicks the ball into the net. Pure class. Roman, are you watching ?

We should have kicked on from there, but sadly we didn’t and it was the keep the ball stuff up until the half time break. There were chances, talking points and some dives in between that though. The dive happened when Park stuck his leg out to the oncoming Zhirkov and fell down. The referee, Mike Dean waved the penalty appeals away. Immediately down the other end, Gary Neville barrages into Anelka, without the slightest intention of getting the ball. This time Mike Dean is doing the same thing. But, I am sorry ref. If that was not a penalty, you’d have to be shot if you want a penalty.

We should have scored immediately after the break. Joe Cole played a wonderful through ball and Ferreira of all people suddenly finds himself in front of goal. But as you would expect from a right back, he scuffed the shot and it went narrowly wide. That was about the last joy we had for about 20 minutes. Because after that United came back strongly and created several heart stopping moments for Chelsea.

Carlo Ancelotti may have won 2 Champions League titles and will certainly know a lot more than I do about football. But he failed to see a major problem with the team and address it. In the second half, Alex Ferguson dropped Scholes into a deep lying midfield role and from the half circle he was spraying passes all over the pitch. It was a disgrace to see him being allowed so much time and space. Every time Scholes got the ball, he was in at-least 15 yards of space. Nobody closed him down, and he passed the ball wide from where crosses came in to create havoc.

It was not until the 70th minute when Drogba came on for Anelka, who struggled to make a impact in the second half, did we start to look comfortable again. Drogba came on and held the ball up which Anelka failed to do in the second half. Kalou came on for Joe Cole and the two substitutions made a difference as they ran at a tired United defence. It eventually paid off when Drogba scored with a thunderous strike, albeit from an offside position. A slice of luck ? Not really, because Macheda scored the luckiest of finishes when the ball went in off his hand after Cech saved from Nani.

Just when it seemed all was comfortable, we were back on the toes again. But Chelsea held on and win for the first time at Old Trafford since 2005. Drogba’s goal was also his first against Manchester United in the Premier League. Chelsea now know that the title is theirs to lose now. Win the remaining 5 matches and the title is back at Stamford Bridge. With tough fixtures against Tottenham and Liverpool, nothing should be taken for granted. But I believe that Chelsea must be strong favourites now to win the title.