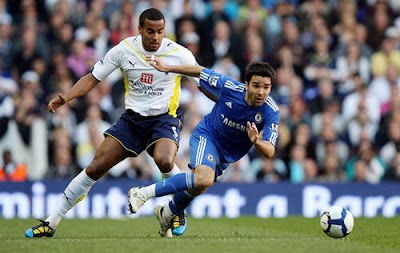 The day could not have gone any worse. First Manchester United win against Manchester City in the 93rd minute and as feared by all Chelsea fans, Chelsea lose to Tottenham. A penalty and a red card complete the day. Memories lead back to Mourinho’s Chelsea going down 2-1 at White Hart Lane with John Terry sent off. Chelsea didn’t win the title that year. It all seems like déjà vu. Many would say that Chelsea still lead the table but the comfortable 4 point lead has been cut to just one point and a goal difference of +2 isn’t significant anymore.

The day started in bright sunshine in Manchester with City managing to hold out United until the 93rd minute when Paul Scholes popped up to score an undeserved winner. I do not know how many times United will score in injury time against City. But at this point Carlo Ancelotti would not have been worried
because if Chelsea win against Tottenham the 4 point lead would be re-established. Chelsea should have come out and played like a team on a mission. Instead they were lacklustre and allowed Tottenham too much time and space on the ball.

I said in the preview that keeping the crowd quiet for the first 15 minutes or so was vital to getting a result. We concede exactly through a Defoe penalty at 11 minutes and give them something to hold on to. Terry might have escaped conceding a penalty against Bolton but he did not against Spurs. Apart from being poor defensively, Chelsea were horrible in attack. There was virtually no movement by the players with all the passes being played either backwards or sideways. Drogba was never in the game. He had about 5 touches of the ball in the first half. There were some half chances though, which on another day would have gone in. In the effort to get a goal back before the break we were left exposed and Cech was beaten at this near post to a shot by Bale.

At the start of the second half Ancelotti brought on Anelka and Ivanovic for Cole and Ferreira. That brought some moment to the play and we created some chances. But it was one of those days when nothing seems to go right. Shots on target were either saved or blocked off. Lampard was very poor and kept giving the ball away. It was not the Lampard we know.

Positives? Well, Lampard scored right at the death by tapping in a superb cross by Ballack. That helps the goal difference a bit. Tottenham could have scored four or five in the final minutes, but managed to miss every one of them. More than anything else, all our bad luck seemed to be saved for this game. I am just hoping that the bad luck is over.

It is also interesting to note that we have lost in all our away games to Aston Villa, Tottenham, Manchester City and Everton. But on the other hand we have won all our big four fixtures. So there is a real chance that we might win against Liverpool. As regards to the title, we should not worry too much about the result but we could have made life a lot easier. We should have wrapped the title by now, but here we are still fighting for it.

Man of the Match: No Chelsea player was worthy to be even considered.