in Awards May 7, 2010 Comments Off on Chelsea: End of Season Awards 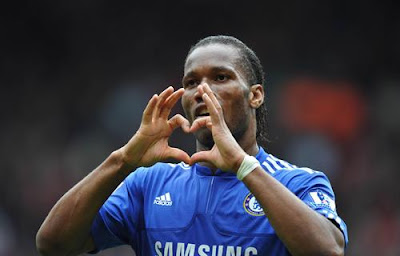 Chelsea as a team still have a lot to do to win the Premier League and the FA cup, but Drogba has won a personal accolade before that. Drogba has been voted as the ‘Chelsea Player of the Year’ for the first time since signing from Marseille in 2004. He succeeds Frank Lampard for the honour. He missed out on winning the PFA player of the year award but was included in the PFA Team of the Year. All these accolades are due to the incredible 33 goals he has scored so far this campaign in spite of missing a month’s
action due to the African Cup of Nations in January. He said,

‘Thank you to all the fans from my heart. When I came here it wasn’t easy for me, I made a lot of mistakes and they always tried to help me. My only desire was to love this club and win a lot of trophies. This is the happiest I have ever been and I want this moment to continue for years and years.’ 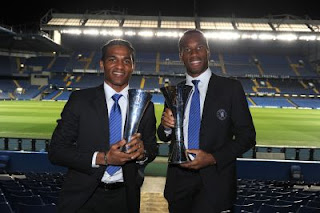 Florent Malouda has been voted the Player’s Player of the Year. He has also been the most improved player after finally establishing himself as a first team regular having been struggling for form since joining Chelsea in 2007. He has scored 15 goals so far this season which is an impressive tally for a winger. 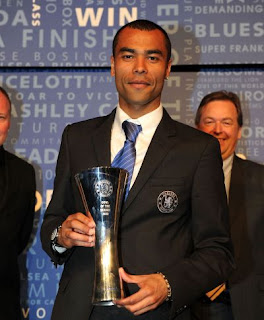 Ashley Cole’s sublime finish after receiving a long ball from John Terry has won the Goal of the Season award. Michael Essien’s thunderbolt against Barcelona in the Champions League semi-finals won the award last time around.

The Young Player of the Year award has gone to the entire U-18’s team just as it did in 2008 for winning the FA Youth Cup. Last year this award was won by Michael Mancienne.

The one player who is missing from all this is Frank Lampard. After scoring an astonishing 26 goals this season and featuring in 49 games so far this season, he must be wondering what to do to win an award. He was recently left out of the PFA Team of the year also.

Chelsea Goal of the season: Ashley Cole against Sunderland