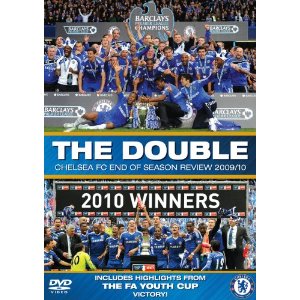 On June 7th ‘The Double: The Chelsea Season review 2009 -2010‘ is released on DVD, commemorating the first time Chelsea FC won both the Premiership title and the FA Cup.

The film shows every one of the 103 goals scored in the Premier league in what was the most exhilarating chase for the Premiership title in recent history, leaving just a point between Chelsea and runner’s up Manchester United when the final whistle blew. The DVD features highlights from the games in which Carlo Ancelotti’s team won against football giants; Arsenal, Manchester United and Liverpool and
interviews with the manager and the team including England star Frank Lampard.