in Champions League, Manager News May 18, 2010 Comments Off on Chelsea Strike Gold in Ancelotti 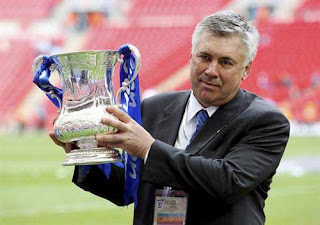 Millions of pounds have been spent on three different managers since Jose Mourinho left Chelsea in September 2007. However, not one in Avram Grant, Scolari or Guus Hiddink could replicate Mourinho’s success for various reasons. Just at the time when all of Roman Abramovich’s decisions seem to have gone wrong, Chelsea seem to have struck gold in Carlo Ancelotti. It has taken 7 years for Chelsea fans to realize why he was Roman’s choice to be the manager instead of Mourinho when he took over Chelsea in 2003

Although regarded highly by the owner, Ancelotti was never seen by English media as a man who
can replicate the success of Mourinho in-spite of winning the Champions League 2 times with AC Milan. There were mixed opinions about as to whether he can cope with the language problems and the pace of the Premier League having been used to the slow Seria A. His record of having won only one league title during his 8 year stay with Milan certainly did not help.

He came into a side that had just won the FA cup under Hiddink. But things were not all rosy to start with. There were suggestions of player power within the camp not to mention the ever mentioned age of the squad. Ancelotti managed a Milan side that had several players approaching their 40th birthdays. So it was a real doubt as to whether he would be willing to change an ageing Chelsea side, but younger in comparison with lot of player already past their 30’s

There were lot of questions to answer. There was initially not a lot of confidence in him from football betting sites, which explained the reason why United were favourites for the title in-spite of losing Christiano Ronaldo.

And he did so in an emphatic manner. Right from the pre-season tour, his calmness and ability to handle pressure was evident. He has managed to impress everyone with his personality not to mention his ability to raise the left eyebrow. He was a complete opposite to Jose Mourinho where everything used to be about Mourinho.

He managed to get the best out of players who were not previously performing at their best. Drogba and Malouda have to be two examples of his excellent man management skills. His English got better and better as the season progressed. He showed that tactically he was second to none by winning all the games against the top four. 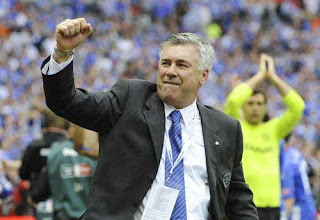 But for all his tactical brilliance he couldn’t beat the ultimate master of tactics, Jose Mourinho, as Chelsea failed to get past the knockout stage of the Champions League. He could have handled the John Terry and Ashley Cole situation with more authority. The Terry situation nearly ended Chelsea’s season but he failed to do anything about it.

But there has to be no doubt that Carlo Ancelotti has done wonders. He has managed to put the club back on track and has managed to do so without spending a penny. But the real objective that he was brought to Chelsea was to bring the Champions League. He has laid more than a foundation for this dream by winning the first double in the club’s history.

Partybets.com reckons that Chelsea are now favourites to win next season’s title. But with some help of some world class players like Torres, Aguero who are rumoured to come to Chelsea next season, he can take Chelsea to the next level, winning the Champions League.