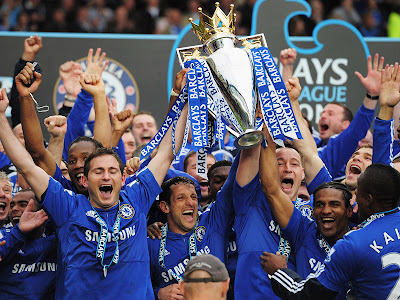 Chelsea are the Barclay’s Premier League Champions 2009-2010. The manner of the win makes the excitement even more special. Scoring eight goals in a game is more than enough to win any football match but this eight goal haul is very special because it brings the title back to Stamford Bridge after a gap of 3 years. Carlo Ancelotti has literally done something magical here. To win the Premier League in the first season is special enough, but to win it by breaking numerous records makes him really one above the ‘Special One’. The biggest of the records has to be the 103 goals scored. This is the first time ever more than 100 goals are scored in the top flight of English Football and that includes the seasons before the Premier League was formed in 1992. I am going to leave the celebrations for now because it deserves a special one.
For now, let’s look back at the match that led to the celebrations.

Both the title chasing teams, Chelsea and Manchester United were kicking off at the same time. Chelsea were at home to Wigan and United were at home to Stoke. The atmosphere at the bridge was surprisingly low key and that was down to the nervousness of the crowd. 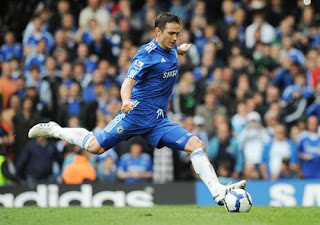 Media suggestions that Chelsea could be nervy were looking to be accurate as Chelsea never got hold of the ball in the early minutes of the match. But the script for this momentous occasion seems to have been written in heaven as Anelka scored from a superb volley from a Malouda touch and kicked off wild celebrations at Stamford Bridge because everyone knew that a goal early on in the game would settle all the nerves. But in fact the opposite happened as Chelsea could not put together 3 or 4 passes. Even though Chelsea were playing like the away team, Wigan didn’t create very much with the possession and when Chelsea got the break that they were looking for. Caldwell pulled down Lampard and was sent off. Lampard scored his 27th goal of the season and the result was more or less confirmed.

The one big damper for the celebrations was Drogba’s reaction to Lampard not giving him the penalty taking rights. It was obvious why Lampard didn’t want anybody else to take. He is the best in the business of taking penalties and wanted to make sure the game is safe. Drogba being a little selfish was throwing toys in the party. 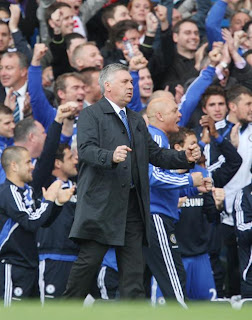 But second half normal service resumed and boy did Chelsea blow Wigan away. The goals kept on coming. The flurry started when Kalou stroked in after receiving a return pass from Lampard. Anelka then scored with a superbly executed volley to make it 4-0. The celebrations had already started by then. But Chelsea had some unfinished business. There were still some records to chase. Up stepped Drogba to score the goal which he so craved for from yet another Lampard assist. Ashley Cole was felled in the box and this time Drogba stepped up to take the penalty making it 6-0 thereby scoring Chelsea’s 100th this season.

At this stage it was the question of whether we could put 7 past a side for the fourth time. Drogba completed his hat trick by tapping in Joe Cole’s cross and the icing on the cake was completed when Joe Cole again crossed in after good work to retrieve the ball to Ashley Cole who struck in a superb volley.

There were some sad moments in the game with possible farewells to Belletti, Ballack and Joe Cole. This could probably be the last time they grace Stamford Bridge as Chelsea players.

All in all, a fantastic win but it probably won’t be remembered for the goals or the performance. It will be remembered for something very special. It is for bringing our first league title in 3 years and fourth in total.

Celebrations will continue here on ‘Chelsea FC – True Blue‘. Be sure to comeback and check out videos, photos and season end reviews. For a picture special of Chelsea’s celebration ‘click here‘