in Championship Celebration May 11, 2010 Comments Off on An Italian Job Part Two : Now for the FA Cup 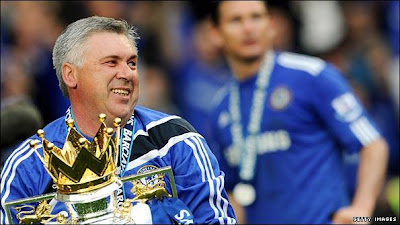 After yesterday’s joyous scenes at Stamford Bridge, as the Blues romped away with the League title on the back of an 8-0 hammering of a truly awful Wigan Athletic, focus for Carlo Ancelotti and his team will now turn towards Wembley Stadium and the seeming formality of winning the FA Cup and becoming the first Chelsea side in history, to lift the double.

Not bad for your first years work in a new job!

Of course Portsmouth will have plenty to say about that. Not since Millwall reached the final in 2003-2004 to take on Manchester United, will any team have been as comprehensive underdogs in the final. It is a
game of massive interest across the world and also typifies the huge contrast of the Premier League this season.

It is truly David v Goliath, Rich V Poor and, let us not forget, the best team in the English Premier League this season, against the worst and to compound matters further, it is a clash between an echo of Chelsea’s managerial past against the quiet, tactical genius of the present.

The stage is set for something very special.

Only, for the football purists waiting for the great cup upsets in the style of West Ham’s victory over Arsenal in 1980 or Wimbledon’s over Liverpool in 1988, it may be a long wait. Chelsea have scored 17 goals in their last three games without reply. Even the most high-stakes punter,  would think twice about lumping on Portsmouth to lift the FA Cup, especially when they are facing the shrewd Italian on the opposite bench.

One of Carlo Ancelotti’s greatest strengths this season is simply how understated he has been. The Italian has been the coolest figure in the Premier League at times, noted often for his absence from the controversial and his insistence on consistency. The chances of Chelsea players taking this game against Portsmouth as already being won, is nil. It is not the Italian’s style to make outlandish Mourinho-esque predictions. Portsmouth will be given as much respect and detailed preparation as a game against Inter Milan or Manchester United would.

It is this attention to detail which is so impressive. A 1-0 victory over Wigan would have been sufficient, but Chelsea scored eight. They’ve scored seven several times this season also. They have beaten their big three opponents in the Premier League home and away. There is little doubt that Chelsea are the deserving Champions and there is equally little doubt that they will be well prepared for a battle against Portsmouth.

There is also little doubt, amongst the football punditry, that if Chelsea continue their current form, that they will be double champions at the end of the game, perhaps convincingly so. The latest live betting suggests just that with Chelsea being 1/5 for the win, a draw currently a 6-1 chance and a Portsmouth win at a staggering 12-1.

If Chelsea triumph, then the victory will see the first two parts of the Italian trilogy complete. Ancelotti has delivered the league title, the FA Cup is next and next season he will have his eyes firmly on the Champions League. The manager feels his current squad is more than capable of playing together at the highest level for several years yet, stating;

“I think this club will have a future because these players are not so old and we have a very good squad, for next year and the years after. This team doesn’t need to change a lot of things. Every player has done a fantastic job this season.”

Few who witnessed the 8-0 humiliation of Wigan will disagree, even if Didier’s mini-strop did threaten to put a dampener on what was an outstanding performance.

However while FA Cup victory over Portsmouth should be forthcoming, Ancelotti may need to add to the squad in the summer. It won’t be major surgery and it won’t, according to the manager, include a big-money move for Fernando Torres. Instead look to his former club AC Milan and Brazilian striker Alexandre Pato, a player who has already got a fantastic relationship with Ancelotti and who would provide Chelsea with the attacking edge to perhaps finally end their Champions League drought.

That is for the future however. For now Chelsea will enjoy their league title victory but work will soon begin, if it hasn’t already, on the preparation for the FA Cup Final with Portsmouth…

And as a perfectionist, Carlo wouldn’t have it any other way.

How Chelsea won the title